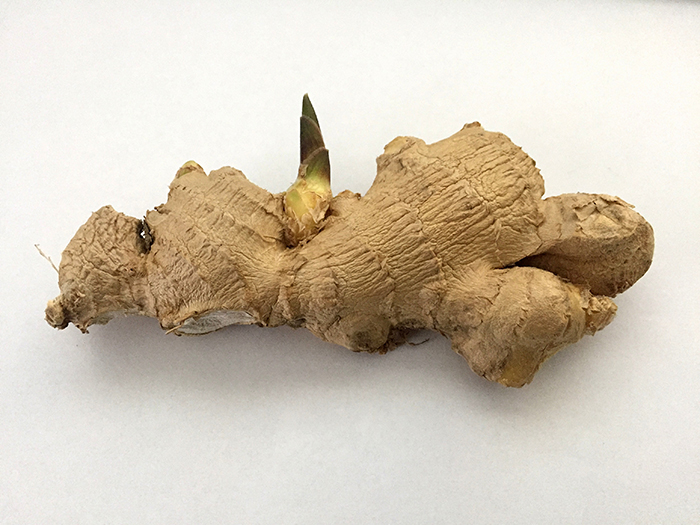 How does one get the idea to write an article on our weblog here about ginger (or “Gember” as it is called in Dutch)? Well simple, you walk in the kitchen and look at the shelf were Miranda keeps all her herbs and spices that don’t need special storage. You see there a ginger root and you notice something special about this root. But more about that later in this article.

Lets have a look at the plant that gives us the ginger root. Ginger (Zingiber officinale) is a flowering plant whose rhizome, ginger root or simply ginger, is widely used as a spice or a folk medicine.
It is a herbaceous perennial which grows annual stems about a meter tall bearing narrow green leaves and yellow flowers. Ginger belongs to the family Zingiberaceae. Ginger originated in the tropical rainforest in Southern Asia. Although ginger no longer grows wild, it is thought to have originated on the Indian subcontinent because the ginger plants grown in India show the largest amount of genetic variation. Ginger was exported to Europe via India in the first century AD as a result of the lucrative spice trade and was used extensively by the Romans.
Ginger produces clusters of white and pink flower buds that bloom into yellow flowers. Because of its aesthetic appeal and the adaptation of the plant to warm climates, it is often used as landscaping around subtropical homes. It is a perennial reed-like plant with annual leafy stems, about a meter tall. Traditionally, the rhizome is gathered when the stalk withers.

Apart from the fact that ginger is a very tasteful spice that can be used in many wonderful ways by the preparing of all kind of dishes, there are many other reasons to use this spice.

Chronic (hidden) infections underlie many of nowadays chronic diseases. Often, you do not feel these but they slumber in your body. Ginger is known as a powerful anti-inflammatory inhibitor and can help you with a wide range of chronic complaints and diseases. This active ingredient in ginger is called 6-gingerol.

It has been a herb for many years has been used for all kinds of pain including menstrual pain. Ginger also proved to be a good remedy for muscle ache after sports.

Ginger improves the efficiency of insulin and your insulin sensitivity. It is able to increase the absorption of glucose from your muscle and fat cells, which will decrease your blood sugar levels as well as the insulin content in your blood faster

Flu and a cold can be cured faster if you use ginger. It has also been shown that ginger can slow down the growth of the stubborn bacterium Helicobacter Pylori. This bacterium is present in your stomach and may be the cause of gastric cancer. There are several bacteria and viruses that are sensitive to ginger and like to clear the field if they come into contact with them.

Ginger has traditionally been used to improve memory. In a study involving 60 middle-aged women, a daily extract of ginger improved their reaction rate and concentration and thinking ability. There are many studies with rats that show that ginger can provide protection against the deterioration of brain functions in ageing, including Alzheimer’s disease and dementia. This probably has everything to do with the anti-inflammatory action of ginger.

One warning though: As ginger thins your blood, you should be careful when using blood thinners.

Well, the thing that I noticed on the ginger in our kitchen was that it is growing a green shoot. And yes, you can grow your own ginger plant and harvest its root.

Just go to a shop and buy a ginger root. It has be a dry solid and undamaged root. Place it with the buds up in soil. Remember that ginger is a tropical plant, so it is need a warm spot. Give it every day water. The soil should be wet, but not too wet.
The plant needs some care, but not real special care. Watch the plant grow and enjoy the flower of the plant. Then during the winter when the plant is in rest, dig up the root. You will see that the root really has grow. Take the best buds to grow new plants and use the rest of the root in kitchen with some delicious dishes!

The ginger root on the photo? It is now in our green house and hopefully it will start soon to grown and give us in the winter our own ginger.

Nothing so nice as to grow your own spices and herbs :-).