Because of Marion’s birthday I promised to cook something nice for her. I thought she would go for fish, but I was wrong. She decided to go for a rib-eye… So I bought two very nice rib-eyes (and ouch… they were not cheap).

Only a little salt and black pepper for the rib-eyes. In olive oil on a high fire I baked them until they were nice medium done.
The oyster sauce I got from Miranda (it was made by herself). But she gave me the recipe so I can make it the next time myself.
To the rib-eyes some shortly fried oyster mushroom were added. I always love them with a nice piece of meat. 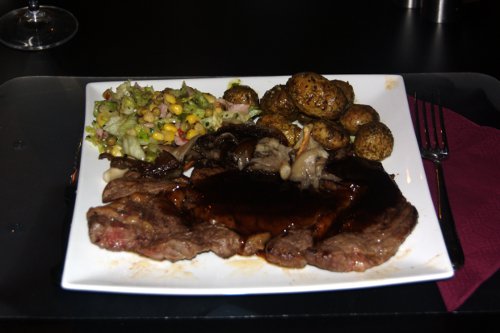 The pommes parisiennes have been resting in a marinade of olive oil with garlic, sea salt and parsley. As a change they were not cooked or baked, but steamed. Something I never done before, but I have to say that I liked the result.

For the salad I used fine cut iceberg lettuce. As dressing a used a normal olive oil. As I wanted I added nicely filled salad I added some green peas, corn, red paprika, sunflower seeds, sun dried tomato, croutons and ham. And of course for the taste some parsley, garlic, chive, union and pepper.

As Marion really loves a Muscadet wine, I bought a very nice bottle of Muscadet. And I bought a real wine-cooler…. one you have to fill up witch ice-cubs. Call me stupid, but I think it is romantic to have such a wine-cooler on the table :)

It all tasted very well in my opinion and I hope Marion also liked it.

1 thought on “Rib-eye with oyster sauce”