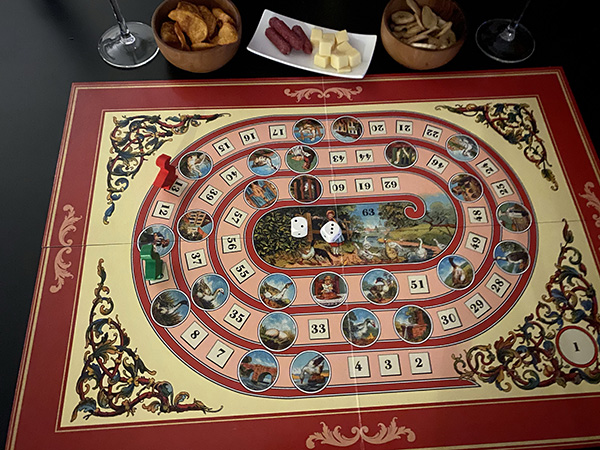 Since lockdown, many amusing things are no longer possible. Things like going out for dinner, having some drinks on a terrace, watching a movie at a cinema or a performance in a theatre, visiting a museum. Those sorts of things.

So we tried to come up with other ways to have fun. And one thing we came up with was (board) games.

For some time already I play chess online with Sanne (yes, the Sanne who writes here also on this blog). She from Haaksbergen and I hear from Heemskerk. We have both a chessboard set up and almost every night, we exchange some moves, It’s very much fun.

It’s also no big secret that Marissa and I enjoy teaming up in online games. We have been playing together for a long time in Everquest 2, an MMORPG (Massively Multiplayer Online Roleplaying Game) which exists since 2004. I started to play in 2005 and Marissa joined much later.
But we also teamed up with newer titles like Titan Fall and Far Cry 5.

But most recently, Marion and I began playing board games over the weekend. Good wine, some snacks and enjoyable music in the background… and a fun board game.

We have been playing games that we already had. Like Scrabble, “Mens erger je niet” (Man, don’t get angry), Mastermind (I owned that one already very long), Catan, Stratego, Monopoly, Risk and others. And we had a lot of fun playing those games.

But last week, I was walking through a store and then I suddenly got a game that I know very well… “Ganzenbord” (The Game of The Goose).
This a very old board game. This is an absolute classic. I remember that we played that at home when I was young. Good memories!
So it didn’t take me long to make the decision to buy the game.

And when after this Corona crisis everything turns back to normal, the board games are for us there to stay…

3 thoughts on “Board Games”