Yesterday, after the walk Sanne and I made on the beach of Zandvoort, back at my home, we chatted a bit. Poor Marion… she is of course often the subject of these conversations

. For those that don’t know it, Marion and Sanne are long time friends. They know each from the time that they went to school together and are really close friends who stand which each other in good times and in bad times. And I am glad that through Marion I got to know Sanne, who I consider now as very dear friend as well.

Anyway, Sanne noticed the chessboard that was standing against the side of the couch. She said that she would like to challenge me for a game of chess if she hadn’t known that in the past I played for some years chess on competition level. As it was for me very long ago that I played chess, I really liked the idea. I told Sanne that I am way off the level that I used to play and that I would love to play a game of chess with her.

With the first game Sanne made a made a fatal error in her opening moves, which leaded to a quick checkmate on her side. I explained where she went wrong and what she could have done to prevent the swift checkmate situation.
Luckily Sanne was not discouraged by this first defeat. On the contrary, she was wanted to do better. And so she challenged me for another game. And this time it went a lot better. She listened very well to the advice to take the time before making a move. Get the complete view. Try to see what the other is planning to do. And try to predict how the other will react on your move. And most of all, and this is the hardest part, try to think ahead.
As said, this game went a lot better. We played for close 3 hours. I loved it, two people concentrating on the chessboard between them… the silence of the room… only the breathing could be heard (… and of course my Zebra finches at times

). And no, I didn’t forget that I was the host, so I served beer and snacks

.
It was really a nice and challenging game. Where Sanne really gave me some hard times… I did win, but not as convincing as the first game. And I liked the challenge Sanne gave me during this game.
After the game I showed her how she was very close on a checkmate on me, that I only could prevent by offering my queen. Sanne already wondered why I gave my queen away…

As said, it was an excellent game!

Sanne told me that she would love to play more often chess with me. Something I would like too. But it shouldn’t ruin evenings when Marion (and others) are around. So I came up with the idea to place chess “on distance”, meaning that we both have set up a chessboard at our homes and that we transfer our moves by mail, text-message, MSN/Skype or whatever means we can use. This way you can concentrate on a next move when ever you have time. You can even think more and longer on a move, which might make the game even more challenging and exciting. 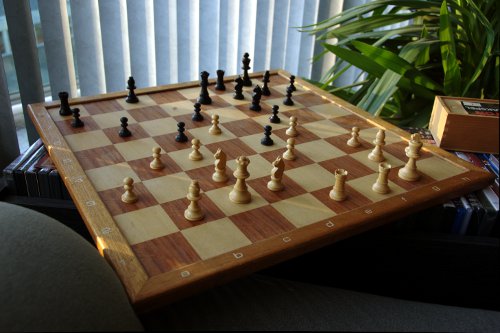 Yesterday we played already a new opening of a game here in Heemskerk. A very nice opening, if I may say so. I just mailed Sanne the moves we made so far (I will need a chess notebook again!). She said that she would buy tomorrow a nice looking chessboard and chess pieces that she can put up in her living room.

It is nice to play chess again

. And Sanne, let me know when you are ready for my next move…