As I already have told before, I really love the chess game. I believe I also told here before that I have played chess for several years on competition level.

For the last time I am playing chess with Sanne (a common friend of Marion and me). Sending each move by mail, text-message or Skype. Basically I have learned Sanne to play chess. And she is a clear example of a student who becomes better as the teacher. Yes, she has become a very good chess player and that makes it a challenge to play with her. That is making things of course interesting. 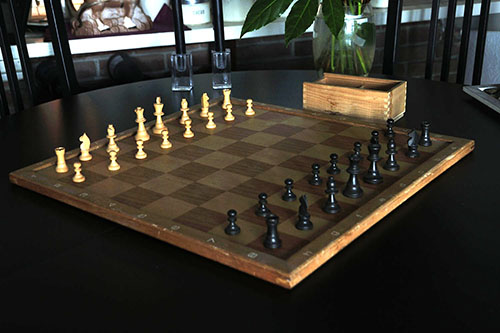 This weekend Sanne was visiting me to play some games of chess. Playing on distance and exchanging the moves by text-messages or something like that is fun. But it is so much better to sit in front of each other and play the game real-time. I can enjoy this so much. The long silences while studying the situation on the chess board. The carefully over thinking the consequences of a move. I love it.

Both games we played were great games. Real challenges that needed a long time to complete… as it should with a game of chess.
I liked it that we both won one of the two games we played. The game of Friday night I won, but I really have to admit that is was a though game. Sanne’s defence were strong, her attacks clever and well thought over. Just by a trick I won. She thought I made a mistake and missed a change for her to take my queen… but it was not a mistake, but a well calculate move to would lead to make her king vulnerable and that gave me the advantage.
The game we played yesterday evening was maybe even more spectacular. Both our defences were very strong. With teases and pokes we tried to the other to provoke an attack, but none of us reacted on that. But with all this I created a small weak spot in my defence and Sanne took fully advantage of that. That was the beginning of the end :-). Very well-played!!

It is always funny how many people react when I tell them that Sanne will stay at my place while Marion is not here… and even worse, she will stay overnight here! I am pretty sure that many think that just friendship between a man and a woman is not possible when one of them is a relation with someone else. Nonsense in my opinion. Sanne and I are the proof of that. People should not always think the most bad of something.

Anyway, I had a very nice weekend with these chess games. And of course the walk with Sanne’s “Drentse patrijs” along the beach was also very nice. We agreed that we should have this kind of weekends we should have more often. And we will!