I hope you don’t mind me contacting you out of the blue. I am writing from the BBC’s Science Television Department where we’re in the process of making a major new documentary series about dinosaurs. In this context I am looking for a great crocodile skull and found one that would be perfect on your flickr page:
##link to a picture on my old Flickr-page##

Do you remember where you took this photograph? If so, it would be great if you could let me know.

Thank you ever so much for your time – I look forward to hearing from you.

With best wishes,
xxxxxxxxx (Name removed to ensure the privacy of the writer)

Woohhh… someone is interested in a very old photograph that I made (it was made in 2005)?

I do realize that there are still many photographs on my old Flickr-page, but I have admit that I hardly think of them anymore. This mainly because I am working on my own photo-site, but due many (good) things the time that I can spend on that site is limited.

Do I remember where that photograph was taken? Oh yes, I do most certainly. It was taken at the old Nature Museum in the city of Enschede. I have been there several times when I was young lad and in 2005 I did visit it again. It was then that I made this photograph (among others of course).
The old museum doesn’t exist anymore. It has merged with other local museums into one large museum called “Twentse Welle”.

Of course I did supply the writer of the mail with all information that I could. But really, this mail made me smile many times during the afternoon and the evening :)

Below the photograph it is were all about… but better processed then on my old Flickr-page (I have learned some things since then :P). 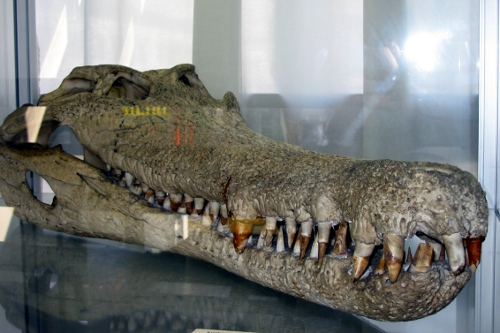 1 thought on “A nice unexpected mail… about crocodiles? *wink*”