The nice thing about packing all your stuff to move to another place is that you find all these things where you had no idea about that you (still) had it.

So today we found a postcard of the block of flats where we used to live. This was the first home of our family after moving from Amsterdam to Haaksbergen. I have only a few pictures from that time and most likely the only one of the building itself.
The flats don’t exist anymore. They were thorn down years ago. 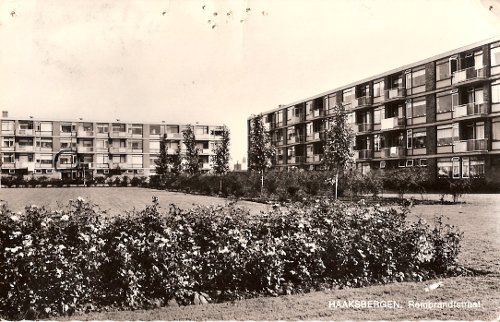 I am happy to have found this postcard so I have a picture of the building where I once lived. But also the backside of it is interesting. On the backside we can read who manufactured the postcard…

Strengers used to be a shop in Haaksbergen that was specialized in souvenirs, household items and toys. It was run by two elderly ladies. The building where their shop was is still there, but there are now other shops in it. Although funny enough one is still a toyshop and it is there were used to be the toy department of Strengers.

Also take a look at the telephone numbers. They are only 4 positions. Nowadays the phone number of Haaksbergen are 7 positions (without the area number).

It is nice to know that at least two items that were bought at the store of Strengers will travelling with me to my new home. A small wooden box to store small valuable items and a newspaper rack….

1 thought on “A picture of old times…”