For a very long time I wanted to have one day some luxury showcases to display things that meant a lot to me…. 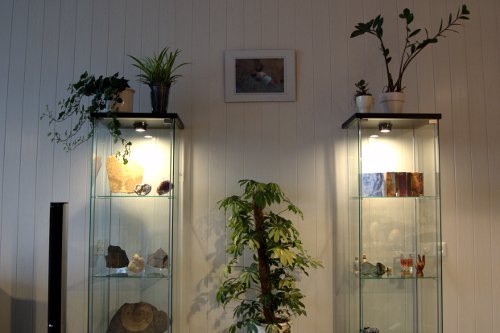 Well, for my new home in Heemskerk I bought two of them. Last week I have placed lights in the two showcases. And today I made the final step to hide away all electric wires as much as possible from sight. I also placed a photograph between the showcases.

In the showcase to the left are fossils and crystals. Some I had already a long time. Others were “Sinter Klaas”-gifts while I stayed at Gambheera’s place.

The other showcase holds things that have dear memories to me…. as my fathers golden watch, the glasses I did wear when I was a young boy, the last remains of my electric rail road, my very first analogue reflex camera, my first computer (a Timex Sinclair 1000) and a real ZX81, the bunny that was made by an aunt when I was born and more…

It feels good to have realized something I wanted for so long in my new home!

4 thoughts on “Another home-decoration step made…”