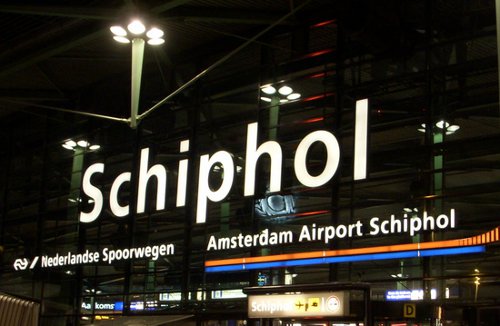 Late during the night of last Friday to Saturday a plane from the US landed on Schiphol Airport… and that was a wonderful moment for me!

The last Friday was a long day… it felt if it lasted forever. I just went to work as normally, but even when I managed to do a lot, the end of the working day didn’t want to arrive. When the working day at last was over I stayed to drink some beers with some colleagues as it is always possible on Fridays at our company. It was a good start of an long evening.

After I arrived at home, I made myself a small dinner, took a shower and went for nap. I knew that nap was needed because I knew that it would become very late that evening.
During my nap I waked up because I heard the phone ring. As my phone is rather an old one, it doesn’t show caller information (at least not over IP). I had to guess who it was that called me. I thought it was Tom, because he just returned from the first part his holiday.
Well, it was Tom. But as I had him on the phone we talked a bit about his holiday. He suggested to drop by for some beers, which I thought was a very good idea as it would shorten the evening for me.

By this time I knew that Sanne and Marion’s father were on their way to Heemskerk. But they would take it easy and have some breaks because Marion’s father was already tired and he dislikes to ride tired and don’t wants to be a danger on the road.

Meanwhile Tom and I had a very good conversation and some very interesting subjects passed by. But I think it was close to 2 o’clock that I felt my eyes become heavy. So Tom and I agreed on the fact that it would be wise for me to have another nap.

After saying goodbye to Tom and wishing him a very nice second part of his holiday, I dropped almost dead on my bed. In seconds I was in the land of dreams. It must have been 45 minutes that I have been asleep before I was waked up again by the intercom. Marion’s father and Sanne had arrived.
We had time for a cup of coffee and then it was finally time to leave for the Schiphol Airport and of course we were still way too early there.

I must say that I felt as young boy on his first date while keeping a close look at the arrival gateway. Many people came through the gateway, but not the one I was waiting for. Which was only logical, because as Sanne reminded me so nicely the plane wasn’t landed yet :P.

Finally we saw that the plane with Marion was landed safely and according to my feeling it still lasted hours before she came through the arrival gateway. But at last the doors opened and that beloved person walked through. I heard Sanne behind me shout of happiness, but I was already rushing towards Marion. Someone who witnessed it might have thought that I was attacking her. But oh my, it was so good to have her in my arms again. There were some tears of happiness going around. Even when she tried to hide, the eyes of Marion’s father were wet as well.

After this warmly welcome we went in the direction of my house. There we sat together and talked a lot, feeling very well. I had prepared some small snacks, because I assumed that all would be a bit hungry of all the excitement and I was right with that.
After some time I noticed that Marion started to fall asleep. The journey she made was long and the jetlag always hits her very hard. So I suggested that get some sleep, an idea that was welcomed very much.
Sanne slept as always on the couch and Marion’s father had his camping-bed (I offered him my bed, but he refused that claiming that his camping bed was more the enough).

In the privacy of our bedroom I admit fully that I enjoyed it very much watching Marion getting ready for the night. Something I have seen so many times, but still…
In bed we talked a bit more… Kissed and caressed a bit, but Marion was so tired that she soon was laying asleep in my arms.
Me? I didn’t sleep that night at all. I just watched the one who I love so much laying beside me… the moonlight entering through the windows made it almost a fairytale picture.

The next morning (to be honest, it was more early afternoon) Sanne surprised us with a wonderful breakfast. It resembled a English breakfast. As Sanne said, we all needed some energy :).

The afternoon was relaxed and good. We chatted and enjoyed the time together. Early evening Marion travelled with her father and Sanne to the town of Haaksbergen. She longed very much for her own home, which is very understandable. The two times she was here during her US adventure she was mostly here in Heemskerk and hardly at her own home. To that she needs really some days to rest and to recover.

Somewhere during the next week she will come back to here and spend some time with me. I have her rather rested well (edit: ough, that sounds very wrong. But that is not the way I meant it).

Well, I will go tomorrow to work as normally… but as a very happy man.

3 thoughts on “The lady is home again….”