As I already told here before on my blog, I go often for a swim on Sundays. I like swimming. It is fun to do and of course it is healthy to do. I always go swimming at “De Waterrakkers” in the town of Heemskerk. 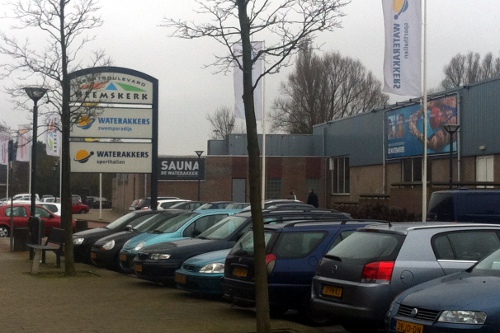 When I go alone, I just do some exercising for an hour or so and then go home.

Because of all the things that happened recently it has been some time that Marion went along we with me. But today she wanted to join me again. So we took our bicycles and made our way to the swimming pool.
I have to admit, swimming together is much more fun. Unlike when I am alone, with Marion we also enjoy the other things that are offered at “De Waterrakers”.
First we did swim a nice number of tracks along the length of the competition pool. This is also what I do mostly when I am alone. After that we spend some time in the whirlpool, which is very relaxing after all those tracks we have done earlier.

At the shop you can get all kind of things, but we did go for some tea. I like the tea, although it was very normal tea. But I did miss the honey I always have in my tea at home. Somehow I don’t like normal sugar so much in my tea. But I can understand that they don’t have honey at a place like this.

After we finished the tea Marion challenged me that I would not able to catch her. I accepted the challenge of course. It must have been a fun sight… me chasing her, both being very careful not to slip or running against other people. I managed to catch Marion in the outside pool (which is directly connected to the other pools). As reward I stole a cuddle and a kiss.

We did some more tracks in the competition pool. I have to say that I started to feel my muscles react on all the labour they had to do. But that was not a bad thing at all.

They have there also these wonderful “herb-baths” and luckily these tubs are big enough for 2 persons. The water is of a very nice warm temperature and in the water there are nice smelling herbs that seems to be very healthy. These herb baths are very relaxing.

I do like “De Waterrakkers”. Only little thing that is a bit a pity is that it easily gets busy. It is not as big as “De Wilder” in Haaksbergen for instance.

When we left “De Waterrakkers” Marion asked if I would like to go the sauna (which belongs to “De Waterrakkers”). We have been before to this sauna and we both like it very much. And as we had no other plans for the rest of the day, I thought it would be a good plan to go there.
After all the tracks we did swim, the sauna was awesome relaxing. It makes you feel comfortable, dreamy and sleepy. I like that a lot.

And there, a big part of the Sunday spend in a very nice way together! And oh, I have decided to go Wednesdays after work swimming as well. This is very good for me.