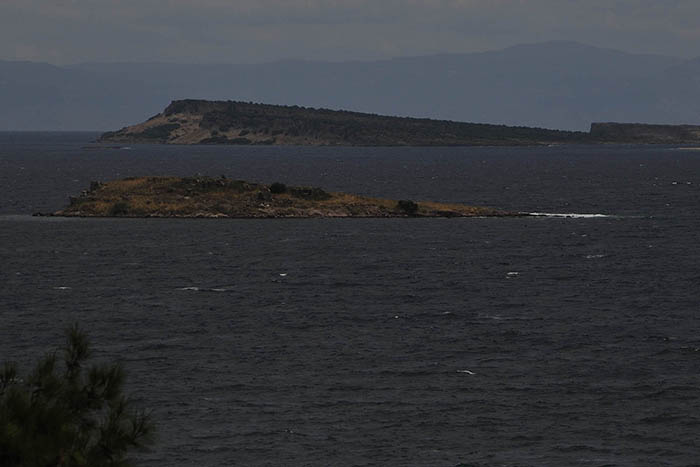 During our vacation this year we have been visiting the Eastern part of Lesvos. A beautiful area where wild horses roam and turtles can be found. Also the home of many bird species, there are more wild bird species on Lesvos than anywhere else in Europe.

At a certain moment we made a break aside a road that led along the East coast of Lesvos. I looked over the sea and saw there some islands. I turned to Mel, our Greek friend from Lesvos, and pointed towards the islands.
Before I even could say something she confirmed smiling that these were the Tokmakia islands (when you look at the photo above, the islands more to the horizon, not the small one closer to the coast).

Last year, when we travelled with our best friends as a group to Lesvos (and Mel certainly belongs to that group), we sailed around Lesvos with Richard as our “captain” as he his the skills and experience to handle a sailboat as the one we rented.
The Tokmakia islands was the place where we dropped the anchor.

It is said that the Tokmakia islands attract, like the ancient Sirens, everyone who is passing by. And that is true, when you are standing on your boat and you see those islands you will feel a strong desire to explore those islands.

The water around the Tokmakia islands is crystal clear, it almost looks as if there is no water. It creates the image that your boat is floating in the air.
The islands are home to many bird and plant species, a wonderful place for those who are interested in these.

As said, last year with visited these islands. The water was too shallow near the beaches, so Richard decided to drop the anchor on some distance. After we made sure that the anchor was properly secured, we swam as true explorers to the island holding food and other stuff above our heads so it would not become wet. After a few times to the sailboat and back we had anything we wanted on the beach of one of the islands (the one called “Ασπρονήσια” or Aspronisia).

On the beach we had the nicest pick nick and even a small BBQ (very good secured so nothing could go wrong).
We swam in the crystal clear water of the sea, we enjoyed the sun on the beach, we explored the island and were amazed by the beauty all around us.

Our time on Ασπρονήσια was truly amazing. Something never to forget. When we left (and made sure no garbage or anything else was left behind) we all were feeling great.
Back on the boat we prepared to sail away and when the anchor was raised I heard Richard say to Marissa that they would come back to these islands.
And oh yes, one day we will go back there…

I must have been standing there for a while, dreaming and watching the Tokmakia islands there out in the sea. Suddenly I felt an arm around my shoulders… Rob… He smiled. And do you know what he whispered in my ear? “We will go back there… “.

And now I know for sure that we will return to the Tokmakia islands one day!

(The photo’s below were made during our holiday of 2016, when we visited as group these wonderful islands).

3 thoughts on “Tokmakia, The Caribbean of Lesvos”