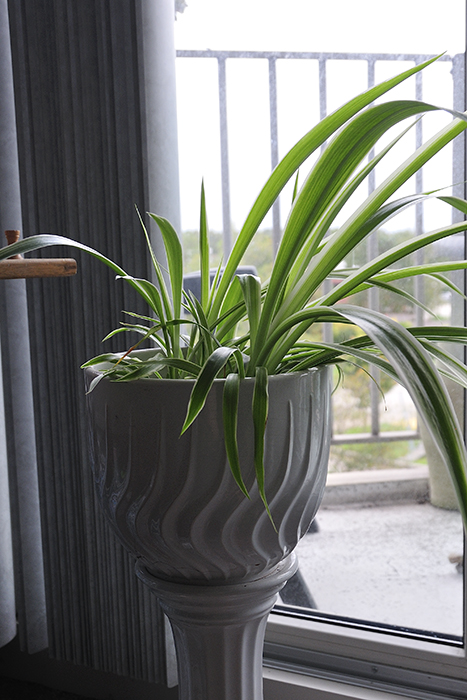 Chlorophytum comosum is a well known houseplant. The common name for this plant is spider plant, but is also known as airplane plant, St. Bernard’s lily, spider ivy or ribbon plant. In Dutch the plant is known as “Zebragras” or “Graslelie”.

It wants a light place, but preferably not too much direct sunlight. Apart from that it is an easy plant to grow. Regularly water and once per month a little fertilizer is all that is needed.

The plant is also known for it air-filtering capacities and for these reason NASA is interested in this plant.

So why an article on this weblog about this rather common houseplant?

Well, during the last years of mothers life, she had a “Zebragras” plant in her house. A nice big and healthy plant.

When my mother was taken in to a home because her health didn’t allow it to live on her own any more, the house where she use to live needed to be cleaned and everything removed from it.
Among other things, I took the “Zebragras”-plant with me to my home.

Since then, this plant was standing in my living room, growing strongly.
That is until summer this year. I noticed the plant stopped growing and clearly the heath was getting weak. I realized that this plant was slowly dying and nothing would stop that.

Luckily, many plants have a special way to multiply: Rooting plant cuttings. Basically this means you take a healthy sprig of a plant and put it in a glass of water. If everything goes well after some time the sprig will start to develop roots. When there enough strong roots the sprig can be placed in potting soil and with a little luck the sprig will start to grow.

Even more luckily is that rooting from cuttings is mostly successful for the “Zebragras” plant.

So some weeks before our holiday to Greece, I took the two most healthy sprigs from my mothers plant and placed them in water. Already after a week the first roots started to grow. One week before we left for Greece, I placed the two sprigs in potting soil.
3 Weeks later on our return the sprig had started to grow and formed new leaves.

I waited two more weeks and the sprigs had grown into strong healthy young plants. The plant I had taken the sprigs from was really almost dead. And the time was there to replace the old plant with the young strong sprigs.

I am happy that I could save the “Zebragras” plant that once belonged to my mother this way and that there is now a strong and healthy plant again, as can be seen on the photo at the top of this article.

The white ceramic pillar and pot on the photo belonged to my parents and was given by my brother, my sister and me to them for their 25th wedding anniversary. The “old plant” was also placed in this plant pot.

Happy that it worked out this way!

1 thought on “Spider plant that belonged to my mother.”